The next generation of crop-destroying spotted lanternflies has taken hold in New Jersey, with the colorful and eye-catching bugs now found nearly everywhere in the state. While the spotted lanternfly doesn’t harm animals or humans, it can cause harm to the plants on which it feeds.

Considered a plant hopper because they can only fly a few feet at a time, spotted lanternflies are adept at attaching themselves to -- or laying their eggs on -- everything from cars to backpacks, camping equipment to gardening tools, building materials to children's playthings. Once attached, they hitchhike along to different locations, increasing their population along the way.

These pests are known to feed off of 70 different plant species, such as wood trees, vegetables, and fruit trees.  In addition to the damage they cause by sucking sap from the leaves and stems of the plants, spotted lanternflies excrete honeydew, a sticky substance that spreads over anything underneath the attacked plant or tree. Those surfaces will eventually be covered in a black sooty mold, further damaging the plant or tree, which can attract other insects such as bees and the honeydew can also cause mold to grow.

Quick Facts about the Spotted Lanternfly

Where Did the SLF Come From?

The spotted lanternfly is native to China, India and Vietnam and was introduced to  the Eastern United States in September 2014. Since then, the insect has  spread from Pennsylvania to New Jersey and far beyond, and is still on the move.

Within their native areas, predators keep these pests under control. However, in the US there is a lack of natural predators, as well as an abundance of preferred host plants, allowing their populations to reach unprecedented levels.

How Can I Control SLF Populations?

Once the insects hatch, from April to June, the best options are squishing them or using chemical sprays. Always consult a professional tree expert for advice before taking any steps to spray or have a tree injected. 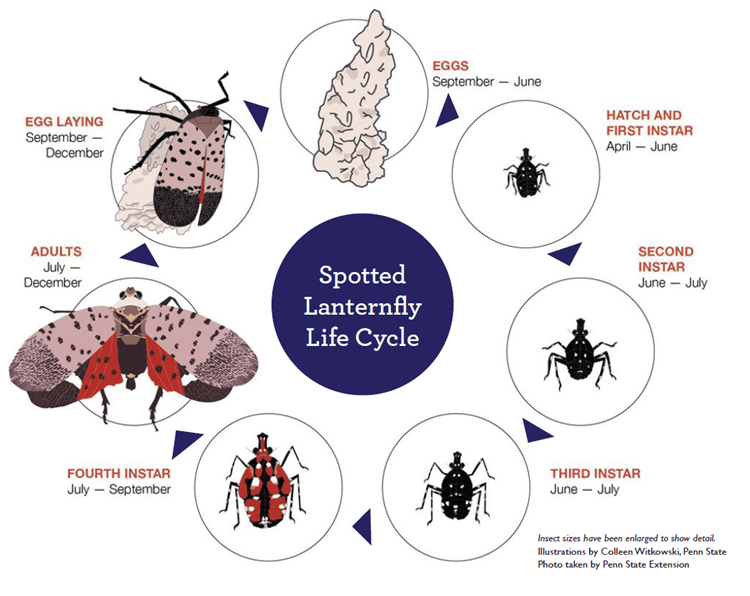 In fact, spotted lanternflies are so pervasive in New Jersey that residents no longer need to report seeing them.

Visit the NJ Department of Agriculture's Pests and Diseases page