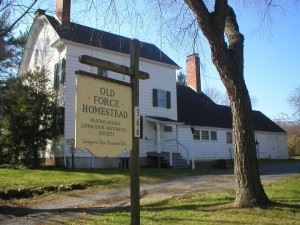 Welcome to the Force Homestead Museum

The Old Force Homestead consists of the Theophilus Ward/Thomas Force House and the Condit Family Cook House. It is owned by the Township of Livingston and is presently a museum and headquarters for the Livingston Historical Society. Both buildings were listed on the State and National Registers of Historic Places in 1981.

Built around 1745 and expanded significantly in the early 19th century, it is one of the few early farmhouses in Livingston that has retained much of its original character, craftsmanship, and details. The well-preserved farmhouse and the surrounding park evoke a clear picture of 18th- and 19th-century rural Essex County.

The Force Homestead Museum, located at 366 S. Livingston Avenue, is open to the public the second Sunday of each month for free docent tours conducted by members of the Livingston Historical Society. In addition, private tours may be arranged by calling Lorraine Palmer at 973-992-6986.

The early American house was built by simple, hard-working people who had neither the time nor the inclination to build a house for anything but shelter. They were constructed almost entirely of wood, a plentiful commodity, which the builders cut and prepared themselves.

The architecture reflected the daily lives of the people. A structure was built solid and tight, with strong beams and thick walls to keep out extreme cold in the winter and excessive heat during summer.

The shingles were handmade from the heart of the oak and the timbers were six inches square. They were tongued deep and beveled off with a chisel, and fastened with wooden pins or pegs. Iron nails, hand drawn and expensive, were used only on the outside.

Most early homes started with one large room which contained a large cooking fireplace. The outside doors faced the south and were farthest from the fireplace. This was to spare those about the hearth from the cold winters blasts of air.

The architecture of the homes in Livingston was New England Colonial in form, but marked by Dutch characteristics, such as overhanging eaves which served as partial awnings over the windows, shading them in summer and keeping the snow and sleet off of the threshold in winter. Dutch ovens were introduced by early settlers from Manhattan and Long Island. There was a tendency to disregard the road completely so the front of the house could face the south. Porches were added only after the war between the States and were a direct influence of the leisurely South.

The Force House, as it is now known, was originally built in 1745 by Theophelous Ward. The large room with the area above was the entire house.

Samuel Force, of French Huguenot origin, purchased the house in 1777 for his son Thomas, who was born in 1758 and served in the Revolutionary War. He was captured and held a prisoner of war on the British ship “Jersey”. After the war, he and his wife, the former Hannah Smith, settled in the house and became the parents of ten children.

As the family increased in number and Thomas became more affluent, he added the larger section of the home.

Thomas operated a saw mill across the street until May, 1816, when his eighteen month old grandson, John Anderson, died as a result of a fall through the mill. The mill was never used again. The ruins of its foundation are still visible.

The Township of Livingston purchased the Force Home in 1962. The outside was in fairly good condition, however, the inside was badly in need of repair.

The center hall was in the worst condition. There were several layers of dirty, dark paper. The floor was in poor condition with worn black and white block linoleum around the outer edges and a lavatory had been built in one corner.

The hall was completely restored with money donated by the Women’s Club of Livingston. The Historical Society received permission to take the floor boards from the old Parker Teed house, which stood near East Mount Pleasant Avenue, and was being torn down. The boards were reversed and laid in the hallway.

The Grandfather’s clock came from the Edison Foundation. The rugs were purchased with funds from the Women’s Club and the original etchings were donated by Mrs. Frank Stover. The original Hitchcock rocking bench was purchased with a donation from Frank Rossback of Staten Island, in memory of his mother who was born in Livingston.

Parts of the Museum: Home and Grounds

The museum room, part of the original house, contains articles of interest, donated by many citizens of the area, too numerous to mention.

The buttery, restored with funds given by the Strahman family in memory of Mr. and Mrs. Herman Strahman Sr., contains many interesting articles of yesteryear.

Near the back door is a mounting block, a relic of bygone horse and buggy days. The lower kitchen has been authentically restored in keeping with the rest of the house and is used for social affairs held at the Force Home.

The third floor which is furnished with Victorian pieces, and contains two interesting items. The large mirrored clothes rack belonged to General McClellan of Civil War fame, and the large desk is the original one used in Livingston’s first Post Office.

The Barn Museum contains many interesting tools and artifacts used in bygone days. Among them are many carpenter tools, a grain barrel hollowed out of a tree, an old sleigh, a broom machine, farm implements, an oxen yoke, a cobbler’s bench, a wind scoop and other items.

The smaller Cook house, now set across the main house, was moved from South Orange Avenue where it stood for many years on the former Ira Condit Farm, now the Livingston Mall. It is one of the oldest buildings in Livingston and was completely restored by the Kiwanis Club of Livingston. In the front of the building is an old Indian stone used to grind corn.

Outside the Force Home, next to the Cook house, volunteers created a “Memorial Garden” provided with seating benches, and also an “Herb Garden” located back of the main house.